We adopted our boy, Nael, at birth in 2011. My husband and I had led our lives until then in a carefree, almost irreverent disregard for the traditional. Nevertheless, I had a very strong maternal instinct, and he a nurturing nature, and we knew that we wanted a big family, eventually. Once we decided to move forward, things didn’t quite go according to plan. The heavens had a different idea for us and so, after almost drowning (emotionally and financially) in the murky waters of fertility, we arrived at the door of adoption. Little did we know the surprises in store for us beyond this point.

Nael was a perfect baby. Beautifully formed, gentle of nature, unfussy. I was hesitant when meeting him but once with him, I felt the tug of the most intense pull that I have ever felt. I fell in love deeply and totally. By 2-3 months of age, we noticed that he wasn’t tracking objects or responding to visual cues. After a round of doctor consultations, with most refraining from saying the dreaded but obvious, I blissfully decided that he was delayed and that all would be fine. My husband, on the other hand, via Skype, saw otherwise and went through an emotional reckoning, alone. At 6 months of age, I brought him to the USA. Our pediatrician referred us to an ophthalmologist. She cheerfully took us into the room and sang nursery rhymes to Nael while examining. She gradually grew quiet, turned on the lights and said that we have to take him for further testing. I badgered her with whys till she finally blurted out, ‘I fear he might be blind’. The world caved in. We came out of the doctor’s office and just looked at each other, shattered. I started crying and asking the inevitable questions, what are we going to do? why did this happen to us? My husband was silent. Sensing the anxiety, Nael started crying. I realized that I was holding him very tightly. At that moment, clarity set in. This is not about us anymore. There is this beautiful, vulnerable being in our care. He will have an atypical path in life. Our job is to ensure that he gets to adulthood as happy, confident and enabled as possible. I started singing his favorite lullaby, the same lullaby my mother used to sing to me, and he calmed down and started smiling again. 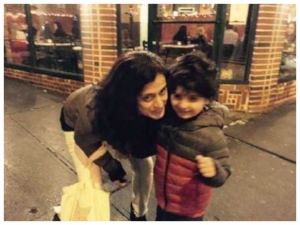 Our life took the road less traveled. We enrolled him in a blind preschool when the time was right. Our world got filled with therapists and managing schedules. I worried about his ability to move, to talk. He walks around independently but carefully, still doesn’t feel confident to run. His speech is getting there. I worried about his ability to play, make friends. He still doesn’t enjoy toys as they hold little relevance to him. Sports are also elusive to him. He loves to play with balls and can distinguish the sound of a basketball from far. He has taken a strong liking to swimming and horse riding and I hope someday we will be able to integrate group sports into his life. He is very curious about other children but doesn’t know how to connect with them. His friends are mostly adults. Instead of playdates, he has activities. I hope one day he will make friends his own age. These are those sadnesses that will go with time for me.

He is the most curious child I have ever met. Has a question for everything, including another question. Wants to know the world with an impatience. He has a wacky sense of humor and is the delight of his school. His other senses are heightened, especially sound. He picks up notes and plays tunes on the piano after hearing them once. He recognizes footsteps and far off noises that no one else notices. He asks me what I am cooking when home from school. His favorite food is Japanese and can name complex flavors upon tasting. He touches everything, loves to be tickled and is a very affectionate, cuddly child. I know one of the biggest challenges for blind people is mobility and independence. He is learning to walk with the cane. I hope he will eventually not rely on others but himself. Of course, even with best intentions, it is so hard as a mother not to make things easier for him but, for his good, this is something I fight with all the time. I still worry about his quality of life when he is an adult and not an adorable child anymore.

A while ago, I had read something that touched me deeply. In any time of uncertain adversity, there is only one guarantee. However your mind is imagining the future to play out, it will never be as such. It will be slightly different, or vastly different but never as you imagine it. Despite all my worrying and misgivings, he has blossomed into a thoughtful, funny and caring child. He has twinkling, expressive eyes. His joy is reflected in them, his sadness, his love. Now that he is an older brother, he is navigating that role very thoughtfully and gently with his little sister.

Raising a disabled child, requires vast amounts of patience and thinking outside the box. It is rich in emotion and fulfillment. There have been times that I have been overwhelmed by despair or awash with gratitude, mostly the latter. We all have a singular life experience, at least that we are aware of. Whether ‘good’ or ‘bad’, it is ours. I have learned how to embrace that and not expect life to follow a prescribed route.

There is a belief I have held for a long time that all of humanity is the same. I am no different from the homeless person or the criminal. If you look into someone’s eyes, you can see their soul, their humanity that has been shaped by their experiences, their opportunities. Now this view was turned on its head. How was I going to apply this to my son when I couldn’t make eye contact with him? Did he not have a soul then? Was his humanity forever hidden from the world?? I now believe that the soul, humanity do not have to show themselves. They exist regardless of our attention. My need to connect via the eyes was my own weakness. Nael and me, our souls are connected. We have always known each other and will always know each other. As he likes to hear in the middle of the night, when we lay awake as his circadian rhythm is off due to blindness, I love you more than the earth, the moon, the skies. The mountains, the deserts, the forests. The rivers, the lakes, the oceans. The seaweed, the ocean floor, the sushi. You ARE my baby.